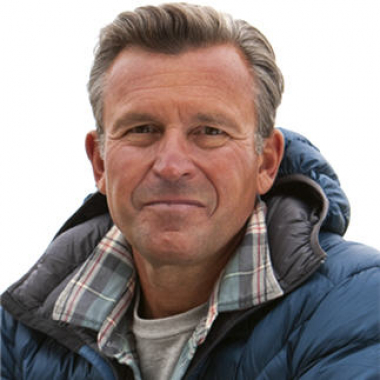 The only American to have climbed all 14 of the world’s eight-thousander mountain peaks, and the fifth person to do so without using supplemental oxygen

He is familiar to many from the 1996 IMAX Everest Expedition documentary and in 2002, he was awarded the historic Lowell Thomas Award by the Explorer’s Club for outstanding achievement in the field of mountaineering.

In winning the award, he joined an elite group of climbers including Sir Edmund Hillary. In 1992 he was awarded the American Alpine Club Sowles Awards for his participation in two rescues on K-2.

He does corporate motivational speeches as well, touching on subjects such as Risk Management, Leadership, Team Work, Overcoming Major Obstacles, and Decision Making Under Pressure.

“Last night was a tremendous success! Sandra and I have heard nothing but rave reviews on your presentation. You were definitely one of the best keynote speakers we’ve ever had! Regards,”

“On behalf of all of us at AIG Financial Lines, thank you for giving the keynote presentation at this year’s Financial Lines Producer Conference in Stowe. Your experience, insight and life lessons are ones that we can all use in both our personal lives and professional careers. You have certainly raised the bar for the individual we choose for next year’s keynote speaker.”

“I wanted to reach out to you with a huge thanks on behalf of the Covidien sales team. I’ve attended and organized many such meetings over my 12 years with the company, and I’ve never had anywhere close to the amount of positive feedback and enthusiasm surrounding a speaker. From the company President to the newest sales rep, I had attendees of all kinds approach me to say how much your message resonated. I really appreciate you staying behind for photos and handshakes – you really made a big impression on everyone with your story, and everyone in the audience was able to relate your points to their individual challenges and pursuit of their goals.”

Ed Viesturs: Making it to the Top of the World’s 8000 Meter Peaks

No Shortcuts to the Top

The Mountain: My Time on Everest

Motivational speaker Ed Viesturs is a professional mountaineer and works as a design consultant for several prominent outdoor equipment manufacturers such as Eddie Bauer/First Ascent and PolarTec. Viesturs is also a Rolex Ambassador and has worked with the Seattle Seahawks, Vancouver Canucks and Seattle Sounders.

Viesturs has successfully reached the summits of all of the world’s fourteen 8000-meter peaks without supplemental oxygen, an 18 year project he christened Endeavor 8000.

His goal was completed on May 12, 2005 with his ascent of Annapurna one of the world’s most treacherous peaks. He is one of only a handful of climbers in history (and the only American) to accomplish this. That year Viesturs was awarded National Geographic’s Adventurer of the Year.

Viesturs was born in 1959 and now lives in Ketchum, Idaho with his wife of 15 years, Paula, and their four children.

His lectures are based on his experiences from 27 years of climbing and include a PowerPoint presentation with dramatic expedition photos.

During the 18 year span to climb the world’s highest peaks he went on 29 Himalayan expeditions and reached the summit on 20 of these occasions and stood on the top of Everest seven times.

He climbs without benefit of an oxygen tank, which he feels can be burdensome and potentially troublesome. Only a superior conditioned athlete can scale heights above 25,000 feet without artificial oxygen – a fact Viesturs has turned into an important metaphor for his audiences (i.e., that the key to the journey is in the time and energy invested in the preparation).

Viesturs motto has always been that climbing has to be a round trip. All of his planning and focus during his climbs maintains this ethic and he is not shy about turning back from a climb if conditions are too severe. In spite of his conservative attitude Viesturs has been one of the most successful Himalayan climbers in American history.

His story is about risk management as well as being patient enough for conditions to allow an ascent. Ultimately, in his words, “The mountain decides whether you climb or not. The art of mountaineering is knowing when to go, when to stay, and when to retreat.”

At the start of their 2005 season the Seattle Seahawks football team brought in Viesturs to speak to them about teamwork. The team and coaches incorporated some of his messages and ideas into their practices and games and went on to play in the Super Bowl that season.

According to Viesturs, regardless of the industry, teamwork is the same: “It is an implicit trust in, and recognition that the person next to you is No. 1,” he explains. “If we’re climbing a mountain together and you slip and fall, I’m there to save your life” – which is the ultimate definition of teamwork.

Another lesson Viesturs espouses is the importance of perseverance, or going step by step and not getting discouraged when working toward your goal. Viesturs recalls once being just 300 feet away from the top of Mount Everest when he had to turn back.