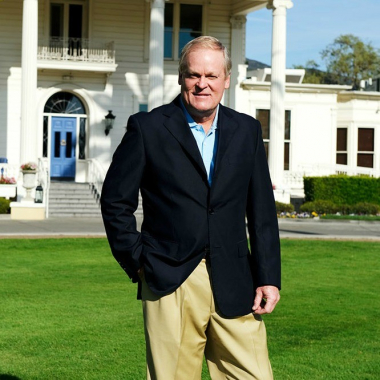 Johnny Miller is remembered by most golf fans for his brilliance at the 1973 U.S. Open when he carded a masterful final-round 63 – dubbed “The Miracle at Oakmont” – to capture his first major championship. His score has been matched by only one other player in major championship history.

Miller was named lead analyst on NBC Sports’ golf coverage team in 1990 and quickly made his mark as the sport’s most candid commentator. In May 1998, he was inducted into the World Golf Hall of Fame in St. Augustine, Florida.

His candor and insight have helped him earn both critical kudos and viewer appreciation.  According to Golf World magazine, “Miller claims the top spot (in a rundown of golf’s top commentators) by virtue of his impact on a telecast.  Controversial, profound, slightly witty, ultra-candid.  He probably had the best playing career of the announcers and now he’s the best at this profession.”

In a fan survey in Sports Illustrated, Miller was named Favorite Golf Analyst. In a 2002 survey, the readers of Golf Digest named Miller Best Analyst on Television for the third time.  Miller was honored as top analyst in the May 2002 and May 2003 issues of Travel & Leisure Golf.

Miller explains his on-air philosophy:  “My goal in announcing is to speak just like I’m in the living room with you and we’re having pizza and I’m just letting go.  Whatever I think comes out. I’m going to do the best job with the most honesty inside me to say, ‘here’s what I think just happened.’ The announcing is a little bit like teaching.  I address a player’s mistakes and sort of give a lesson on TV.  When I played, I didn’t play down the middle and I don’t announce down the middle.  That would be boring.”

“Knowing when it’s your time!”

There are legions of golf fans who know Johnny Miller only as a television broadcaster. After retiring from the PGA Tour, Miller rarely played the Champions Tour, and his fame as a golfer faded.

When he debuted on golf telecasts as an analyst, Miller was a breath of fresh air, unafraid to call it as he saw it. Miller even had the gumption to toss around the word “choke” and apply it to specific players. Many golf fans and professional golfers came to love Miller’s broadcasting; but many also came to dislike it, believing Miller too blunt.

Those who know Miller only as a broadcaster are missing the knowledge of what a truly great golfer he was in his prime.

Miller grew up in San Francisco and won the 1964 U.S. Junior Amateur Championship, then had a successful college career at Brigham Young University. As a 19-year-old amateur, Miller finished eighth at the 1966 U.S. Open. He turned pro in 1969.

He’d won twice on the PGA Tour when, at the 1973 U.S. Open, he produced one of the best rounds of golf ever played. Miller’s final-round 63 led him to the first of his two major championships. Coming on the brutal Oakmont Country Club layout, and in the final round, and producing a victory, that round is ranked by many the greatest in the history of golf.

In 1974, Miller won eight tournaments, the money title and the Player of the Year award. He won four more times in 1975.

The World Golf Hall of Fame says: “In golf’s modern era, it’s commonly understood that no player has ever achieved the brief but memorable brilliance of Johnny Miller. … (In 1974-75) Miller hit the ball consistently closer to the flag than any player in history. At his best, Miller’s game was marked by incredibly aggressive and equally accurate iron play.”

Miller’s playing credentials would likely be even stronger had he not been plagued by a series of injuries and, later in his career, the yips. He overcame both for his final victory, the 1994 Pebble Beach Pro-Am.

Miller is part of a limited partnership which purchased Silverado Country Club in Napa, California on July 1, 2010. He also owns a golf design company and a golf academy and designed the Thanksgiving Point Golf Course in Lehi, Utah, host of the Champion’s Challenge. He is also a frequent contributor to Golf Digest , offering insight into various aspects of golf.

Johnny Miller was elected to the World Golf Hall of Fame in 1996.

Johnny talks candidly about his youth and how is Dad brought him up to become A U.S. Open Champion..which of course he did.

He talks about his Hall Of Fame Playing days, his struggles
and his accomplishments, and his very successful career as the top
TV Golf Analyst. He talks about his success as a husband, Father of 6 and Grandfather of 23, his love of golf and how golf, family, and business are all connected!

He also speaks of all his relationships and inside information regarding the other legends of the game! Jack Nicklaus, Arnold Palmer, Tiger Woods, Phil Mickelson etc.

The audience can take lessons learned in Johnny’s talk back with them and use to better themselves in business and in Life!