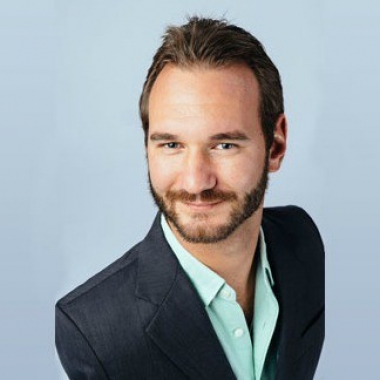 Your attitude determines your ability to succeed. How you respond to challenges,approach change and deal with difficulties—even how you think about yourself—are all key factors in success, both in life and business.

Born without limbs for no medical reason, Nick Vujicic knew from an early age that he was different.

But it wasn’t until much later, after overcoming ignorance and discrimination to build what he calls a “ridiculously good” life, that he realized his mission: to use his “disability” to start conversations that change lives.

He has since spoken over 3,000 times in a total of more than 57 countries on topics as varied as bullying, inspiring positive change, persistence and determination, and his own life story.

No matter where he goes he communicates one core message— that no matter your circumstance, you can overcome!

Nick is the author of several books, including Life Without Limits: Inspiration for a Ridiculously Good Life, Unstoppable: The Incredible Power of Faith in Action, Love Without Limits: A Remarkable Story of True Love Conquering All and Stand Strong: You Can Overcome Bullying (and Other Stuff That Keeps You Down).

The most inspirational video you will ever see Nick Vujicic

Life Without Limits: Inspiration for a Ridiculously Good Life

Imagine getting through your busy day without hands or legs. Picture your life without the ability to walk, care for your basic needs, or even embrace those you love. Meet Nicholas Vujicic (pronounced VOO-yee-cheech). Without any medical explanation or warning, Nick was born in 1982 in Melbourne, Australia, without arms and legs. Three sonograms failed to reveal complications. And yet, the Vujicic family was destined to cope with both the challenge and blessing of raising a son who refused to allow his physical condition to limit his lifestyle.

The early days were difficult. Throughout his childhood, Nick not only dealt with the typical challenges of school and adolescence, but he also struggled with depression and loneliness. Nick constantly wondered why he was different than all the other kids. He questioned the purpose of life, or if he even had a purpose.

According to Nick, the victory over his struggles, as well as his strength and passion for life today, can be credited to his faith in God. His family, friends and the many people he has encountered along the journey have inspired him to carry on, as well.

Since his first speaking engagement at age 19, Nick has traveled around the world, sharing his story with millions, sometimes in stadiums filled to capacity, speaking to a range of diverse groups such as students, teachers, young people, business professionals and church congregations of all sizes. Today this dynamic young evangelist has accomplished more than most people achieve in a lifetime. He’s an author, musician, actor, and his hobbies include fishing, painting and swimming. In 2007, Nick made the long journey from Australia to southern California where he is the president of the international non-profit ministry, Life Without Limbs, which was established in 2005.

Nick says, “If God can use a man without arms and legs to be His hands and feet, then He will certainly use any willing heart!” Nick’s latest foray into radio will expand his platform for inviting men and women all around the world to embrace the liberating hope and message of Jesus Christ.

Attitude Is Everything And Self-Perception Determines Direction

These are the principles of the Attitude is Altitude program. Nick Vujicic has a unique plan designed to enhance the lives of employees, employers, students and educators alike. Through Nick’s motivational talks people will discover that a positive approach points the way to a meaningful life.

Nick speaks from experience. He was born with no arms and no legs. To most this would be a great detriment, but to Nick it was a challenge to triumph . Yes, the other children insulted him, poked fun, and asked many questions. There were bouts of great despair and darkness, but Nick made a conscious effort to prevail and to dream big. Realizing it was about how he perceived his own situation, Nick changed the course of his life. He had a purpose. Today people gather strength from Nick and tap into their own worth, as he guides them through an insightful method of achieving greatness, regardless of situation.

Nick’s inspirational program is sure to captivate the world. People will learn how to overcome adversity, persevere under any circumstance and attain the height of their ambition. Nick Vujicic is reaching out to the corporate world and the educational system with powerful words of encouragement. We all matter!

Businesses profit from our approach. He utilizes the concept of positive thinking and incorporate it into the work environment. He has created a refreshing view on how to define goals, envision success and make choices that lead to victory.

Nick Vujicic’s life demonstrates that all things are possible.